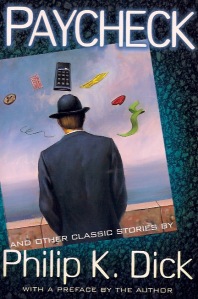 At the time of the writing of Sutin’s PKD biography Stability was an unpublished SF story that survived from his high school years. According to Sutin:

“… Stability depicts a post-twenty-fifth-century dystopia governed by the stifling principle of “Stabilization,” which permits no political or technological change. Similar static dystopias would appear in two of Phil’s SF novels of the fifties: The World According to Jones and The Man Who Japed.”

“[involves] … a dystopian human society displaced by a dystopian machine-run world. Such characteristic Dickian tropes as talking robot cabs and time-travel paradoxes are fully formed and in place.”

According to the PKD fan site, Stability was written in 1947, but was not published until forty years later in 1987.  The version I read can be found in Citadel Press Book’s collection, Paycheck and Other Classic Stories by Philip K. Dick.  A short 11 pages, the sci fi tale follows Robert Benton’s time travels to discover a sinister lost city manipulating it’s evil return to civilization.

It’s first few paragraphs introduce us to an airborne angelic Benton and his home world of an undisclosed future civilization, which unable to progress and unwilling to regress, has elected and enforced a static society to maintain order and stability. Then through an altered time line, Benton comes into possession of a diabolical time machine with slavish consequences.

Paycheck and Other Classic Stories by Philip K. Dick, (2003), Citadel.