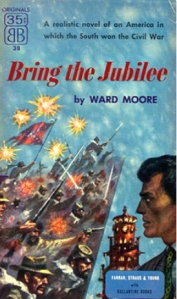 Bring the Jubilee is a 1953 novel of an alternate American Civil War history by Ward Moore. It first appeared, in a shorter format, serialized in the same 1952 issue of Fantasy & Science Fiction as PKD’s story The Little Movement. The phrase “Bring the Jubilee” is a reference to the chorus of a popular military song: “Marching Through Georgia”. There are many other reputed sources of inspiration for PKD’s Hugo Award winning novel, The Man in the High Castle, such as:

If it had Happened Otherwise (1931) by Winston Churchill – Alternate What-If historical essay on the Civil War;

Sidewise in Time (1934) by Murray Leinster – Yet another Civil War alternative history;

Barrier (1942) By Anthony Boucher – Time-Travel into the future where an Authoritarian state has erected barriers preventing backward Time-Travel;

Two Dooms (1958) by Cyril Kornbluth – A defeated US divided between German and Japanese Zones; and

Jubilee, however, has consistently been referenced in PKD’s historical record as the main spark for High Castle. Per Rickman:

“Phil had suggested that I read Ward Moore’s novel, Bring the Jubilee. I borrowed it from the library and read it with delight. Bring the Jubilee is an alternate-reality novel set in a world in which the South has won the Civil War. A footnote in it refers to a novel written by a Northerner about a world in which the North has won the Civil War. It wouldn’t be our North, but a North that a Southern writer living in a victorious South would imagine. I told Phil, ‘I wish Ward Moore had developed that fascinating idea further. I wonder what that world was like?’”

“Phil was influenced by Ward Moore’s novel Bring the Jubilee …”

Given the Southern Confederate subject matter, I was originally hesitant to read it; but I rationalized that it was necessary if I was to better understand PKD and his High Castle. I b

ought and read the Wildside Press; Reprint edition (January 1, 2009). Delightedly, I was somewhat surprised when it proved to be a more progressive writing–at least for the 1950s era it was written in.  Nonetheless it is archaic; and its treatment of minorities and women, in my opinion, would bristle today’s younger millennial audience.

Jubilee’s fictional point of divergence occurs in July 1863 when the Confederate States of America wins the Battle of Gettysburg and subsequently declares victory in a conflict referred to within the book as the “War of Southron Independence” on July 4, 1864, after the surrender of the United States of America. The novel takes place in an impoverished United States in the mid-20th century as war brews between the Confederacy and the German Union. After many adventures, Hodge Backmaker, the main protagonist, decides to travel back in time to witness the moment when the South wins the Civil War.

I can now discern why this book would appeal to a young berkeleyan Phil Dick. It espoused a protestant work ethic, and offered what would be considered liberal viewpoints–in education and the treatment of minorities–in 1950s America. It also included philosophical and psychological debates on free will and indentured servitude. Plus, it offered a fantasy driven love triangle between Hodge and two diametrically opposed female leads–the intellectual dominatrix physicist versus the wholesome and submissive young rich debutante. Rich in detail, it presents a retro steampunk-like novel in which steam powered modes of transportation (minibiles and dirigibles), alongside the Morse Code telegraph, serve as the main driving technologies. In the end it is a basic time-travel tale, but it also uniquely posits the idea that despite the hero’s time traveling alterations for the better (our world of the 1950s, where the north wins and civil rights for blacks advance, is identified as the superior of the two) there remains the possibility that the Southron empire continues to exist in a parallel timeline. If only Hodge possessed the required scientific knowledge, he could in theory go back home to his original timeline1.  The book abruptly ends with an “editorial note”, where Hodge’s personal effects, and the story we just read, are newly discovered in our future timeline. 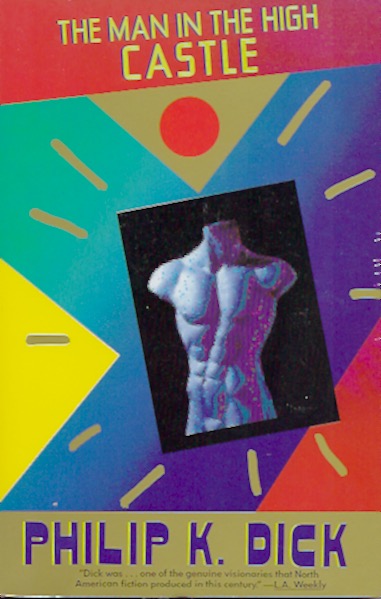 1Didn’t the MCU’s Avengers Endgame most recently make use of a similar plot device–if you change the past, you create a new parallel universe that branches off from the moment you changed said past — but when you travel into the future, you return to your original future, not the new one created by the changes you made in the past?

Carrère, Emmanuel. I Am Alive and You Are Dead. Henry Holt and Co.. Kindle Edition.

Roog is PKD’s first short story sale, but it was his eighth published. He was only paid $75 for his hard work to whittle it down (at the advice of Tony Boucher the editor in chief) from about eight thousand words or more, to the published two thousand, while still maintaining his job at the record store.  On November 8, 1951 he wrote a thank you letter to The Magazine of Fantasy and Science Fiction for purchasing his story that included the following snippet:

“Oddly, most of my writing tends to fantasy of a religious, questing nature, ill-suited for worldly things or large publications.”

Kleo, PKD’s second wife at the time, was originally unaware of his dream of  a writing career. It was only after their marriage that she learned of his aspirations, when he asked her to read Of Withered Apples and Friday Morning (Roog’s original title). 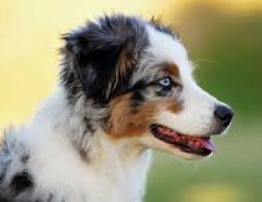 Roog is “a dog’s eye view of garbage men as aliens.” Boris the dog (inspired by the snooper Australian shepherd that lived next door and kept Dick awake at night) faithfully guards the strong metal food containers that serve as offering urns. He ‘understands’ the disparaging talk of the ‘alien’ and rotten smelling garbagemen who conspire to abduct his owners. Their nefarious plans begin with the stealing of the garbage for analysis.  In warning Boris barks “roog” (the dog’s chosen name for the plotting aliens) to his owners, but to no avail. He is not understood; worse, his cries annoy his owners Alf (alien life form? is this a coincidence?) and Mrs. Cardossi, who in turn, now talk of giving him away. The humans’ indifference put Boris in peril. The story ends with the garbagemen laughingly making yet another getaway with the sacred garbage, as Boris despairingly watches in terror.

This short story is considered one of PKD’s favorites where he attempts to get into another creature’s head (its idios kosmos). In The Collected Stories of Philip K. Dick the author says that Roog “tells of … a good creature who cannot convey knowledge of that menace to those he loves.” In a later interview he states, “it’s like the dog’s dreams of his own world. Not just the dog’s – his own dream of his own world – his own nightmare of his world.” Perhaps in the dog, PKD even saw a little of himself, as the author who can sense the horrifying penultimate reality but cannot faithfully articulate what he envisions to his readers.

Carrère, Emmanuel. I Am Alive and You Are Dead. Henry Holt and Co.. Kindle Edition.